Dr. Nason and I first met when myself and two other Dal classmates walked into his office five odd years ago to pitch him on the prospects of us starting the Dalhousie Investment Society (DALIS) and him championing our cause at the Faculty level. I won’t use exact words but he basically go told us to fly a kite. Somewhat deterred by his blunt nature yet keen to push on for some reason, we came back the following week with a modified pitch. These steps repeated themselves over and over for a period of time until he finally realized that we weren’t some flash in the pan leadership team and were actually committed to getting a student-run hedge fund off the ground. Little did we know, he was testing us the whole time. Fast forward a few years and hundreds of hours grinding out late night sessions in the Bloomberg lab and here we are… Trying to solve the world’s problems in Coffeetalk with my now friend, Rick.  Let’s do this!

Mike: To say you are a highly educated man is an understatement, evident of the two Masters degrees and two PHD’s you have earned. How did you break onto Wall Street and was that always your goal?­

Rick: First off I do have two master’s degrees, but only one PhD. I did most of the course work and the comprehensive exams for a PhD at Pitt but never started a thesis for my PhD in physics.

Ever since I was in Junior High I wanted to be a physicist. My goal was never to break into Wall Street until I got to Business School, and even then I was undecided between marketing and finance. The reason I started business school in the first place is that I by chance saw a magazine cover story in the library that stated that Wall Street wanted physicists. I looked at the article and talked to a few people and realized I had a better chance of being somewhat more successful in business than in physics. The jobs in physics at that time (and to some extent today) where few and far between unless you wanted to build bombs – which I did not want to do. My break occurred when I was able to convince a Senior Manager that my unique background in physics, academic finance, sales and as a tennis club pro was a unique but valuable combination of skills to have.

Mike: What is the role of a university business school… To educate or to prepare for the real world?

Rick: We do not have time or space for my full answer on this question. I believe the role of a University is to give students the skills and tools for life-long learning. If one is truly educated and given the skills and the inspiration to learn then they will also be prepared for the real world. Unfortunately – in my opinion – the current focus in education is on knowing things, and not about learning. Knowing things in my mind is a commodity. It is about how things are connected and more importantly about how things might be connected that counts. In the real world, and in real world business, things are messy and uncertain. Business schools however take the easier route of assuming out the messiness in order to provide nice clean answers. The answer to most real world business problems is “maybe”. For every business problem that has an answer, that answer will be useless at the next instance of creative destruction. By failing to recognize and deal with these realities, business schools are falling short of both educating and preparing students for the real world.

Mike: What subject matter(s) or skill-set do you think will be most in demand in 25 years’ time?

Rick: I think that (a) empathy, (b) accountability, and (c) the ability to connect the dots will be the most valuable business skills in 25 years’ time. The current fashion is to talk about data analysis and STEM skills. I believe these are simply table stakes. Computers and robots will make STEM knowledge somewhat quaint. However the person who has empathy, and in particular sociological empathy, which I define as understanding what drives a group of people rather than individuals or a collection of individuals, is the person who will be able to name their job and their price. This is why I have made a commitment to myself to read each of Shakespeare’s plays over the next year (albeit in a Modern English translation).

Mike: You are a subject matter expert on risk and complexity in the financial world. Seemingly, our banking system is becoming ever more complex by the day, perhaps too complex in the eyes of some. Should the everyday consumer be worried?

Rick: I think it is very important to understand the different between complicated things and complex things in the sense that a scientist classifies them (which is what my upcoming book is about). Complicated things are processes or systems that are governed by rules or laws, like the laws of physics, or the regulations of a system. Complex things are those that evolve naturally (emerge is the technical term) and do not have leaders or laws to guide them – things like videos that go viral or fashions that become the temporary rage, or even the financial markets. What worries me is that governments and regulators, in an attempt to be seen as doing something of purpose, are creating a lot of complicated laws to manage something that is complex. In my opinion it is the exact wrong way to deal with the issues of financial stability and economic progress.

Mike: What is the biggest mistake you see university students make when trying to land their first big job, whether an internship or full-time gig upon graduating?

Rick: The biggest mistake I see university students make is not taking the time to try and understand who they are, what they really like, and what their strengths and weaknesses are, and not asking themselves tough questions about what they are and are not willing to do to succeed (I am talking about work ethic, not moral ethic). I see too many students who are trying to live up to someone else’s ideal and not their own ideals. The only thing worse than not living up to your own ideals is not having any ideals, (or equivalently not making an effort to find out what your ideals are). The second biggest mistake – which may be related – is not having faith in their own ability. Increasingly I see more and more students who would rather settle for mediocre than risk an attempt at going for what they really want and perhaps coming up short.

Mike: What are 3 of your favorite books? Can be on any topic…

Rick: The Tao of Pooh by Benjamin Hoff. This was given to me by a professor in college and I go back to it every now and then when I need to get a simple slap in the face of perspective.

The Feynman Lectures on Physics by Richard Feynman and Robert Leighton. Scientific writing simply does not get any better than this. It makes you realize how small and inadequate your brain is compared to a renowned physicist like Feynman.

Atlas Shrugged by Ayn Rand. Not a great book in terms of writing, but a powerful theme and message. More people need to be asking “Who is John Galt?”

The Message by Eugene Peterson. A translation of the Bible that brings it to life no matter what your views on any given religion are.

(I was never that good at conventional math so I may have miscounted.)

Mike: What is one misconception and one truth of Wall Street (or perhaps Wall Street as we knew it) that you can confirm having lived and breathed that life for many years?

Mike: You have a free summer day in Halifax… What does Rick Nason do?

Rick: Rick Nason gets up and goes to the Ardmore for breakfast. I then go sit down at the lake that my house is situated on and feed the ducks for the afternoon while reading a book and enjoying a nice beverage, and a great Dominican product. Then in conjunction with my wife, we will host a barbeque and then relax around the fire-pit with friends and enjoy more fine beverages and fine Dominican products.

Mike: Pick 3 people alive on the planet to have dinner with. Who are they and why?

Rick: Mr. Mathews my Junior High Science and Math teacher. I have been truly blessed by having many great teachers and professors in my past (Dr. White, Dr. Shaw, Dr. Cohen, Dr. Dulin, Dr. Harkleroad, Dr. Sharp, Mr. Snodgrass, Sister Forsythe) but Mr. Mathews was the one who started my love of science and of asking questions and one cannot overestimate the positive influence he has had on my life. Unfortunately I lost contact (I do not even know his first name). Perhaps someone will read this and send me his contact info. I would gladly buy the dinner.

George W. Bush. Not necessarily because I was a fan, but he was the President during two big events in my life – 9/11 and the financial crisis of 2008. I believe that if I took an oath of secrecy that he would tell me – without any spin – what was really going on behind the scenes and what he really thought. I believe he would relish the opportunity to give his view since everyone else and their dog has written about these events. I believe that too much of what we read in the media is dumbed down to such a level as to be useless or trumped up (no pun intended) for marketing purposes as to make the message beside the point.

My wife. Because I still love her after 30 plus years and she is one of the few people on this planet who will put up with me.

Well there you have it folks… That’s 10 top notch questions with one of the best minds in the biz! If you interested in learning more about Rick’s views on the world, you can check out his TED talk here titled “Physics Meets Wall Street – Complexity in Business“. Tis’ always a pleasure, Rick. 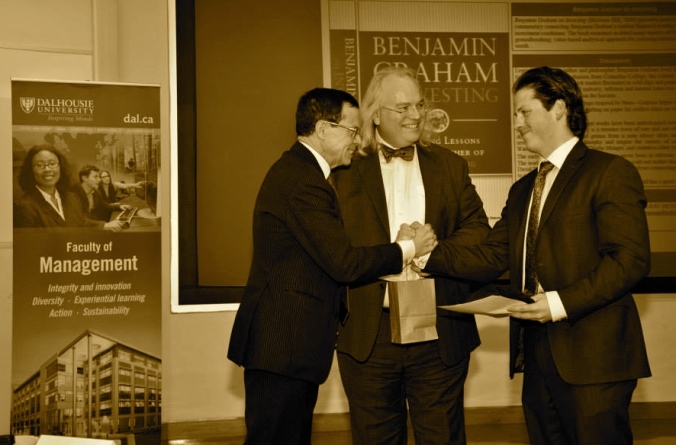